Be updated with latest Summit info on the go.
Download Event App now!

The Risk Games Convention is a revolutionary format designed to help risk management professionals in Asian commercial banks rehearse in detail the different possible scenarios they will be confronted with in 2015-2016 and achieve stronger decision making skills.

The Convention is made up of three different sets of activities:

The Risk Games is an Interactive Learning Conference

For the discussions on the three key areas, the session begins with a simulation exercise. Following a briefing, four person teams using their own laptops will be given the parameters of the bank whose balance sheet or operations they will be required to manage.

Teams will be required to enter their responses into a simulation programme, which will then be assessed by the advisors.

After the results are computed, the delegates will discuss the implementation issues they faced and the relationship with real life decisions they have to make. The advisors will then give their overall assessment, following which there will be a general discussion on the issues.

Objectives of The Risk Games Convention

More specifically, the programme is especially designed to sharpen the following skills:

A team comprising delegates with complementary or aligned functions will find this programme immensely meaningful.

The programme assumes that the CEO, CFO, CRO and treasury teams work in concert with each other. No balance sheet experience is required.

Michael Ong, Chair, The Risk Games Convention
Dr. Ong was a professor of finance at the Illinois Institute of Technology up till 2014, and author of books on Basel, credit risk modelling and capital allocation that are widely read in the financial services industry. Previously, he was EVP and CRO of Credit Agricole Indosuez, where he held enterprise-wide responsibility for all risk management functions for corporate banking, merchant banking, asset management, capital markets activities, and the Carr Futures Group.

Andre Thibeault, Co-Chair, The Risk Games Convention
Professor Thibeault is the head of the Centre for Financial Services at Belgium’s Vlerick Business School. He was previously the chair of the finance department at the Nyenrode Business University in the Netherlands and the director of the finance insurance department of Laval University in Canada. His pioneering risk simulations have been adopted by leading banks and universities in both North America and Europe.

Karen Kemp, Executive Director of Banking Policy Hong Kong Monetary Authority
Kemp has been employed by the HKMA since 1995. She was a Deputy General Counsel in the Office of the General Counsel prior to being appointed to her current post in 2008. Kemp also served as Deputy Chief Executive Officer of Exchange Fund Investment Limited from 1999 to 2003. She is a solicitor qualified to practise in Hong Kong and in England & Wales. Prior to joining the HKMA, Kemp was employed by Lovells (a firm of solicitors) in London and Hong Kong.

Rungporn Roengpitya, Head, Quantitative Models and Financial Engineering, Bank of Thailand
Dr. Roengpitya rejoined the Bank of Thailand (BOT) in 2014 after a sabbatical as Visiting Adviser to the Bank of International Settlements. Her interests include developing methodologies for loan quality forecasting, auditing IRB PD models and banking development and stability research. Prior to the BOT, she was with the Federal Reserve Bank of Chicago and the International Monetary Fund. She has a Ph.D. in Economics from the University of Chicago.

Wilfred Nagel, Group Chief Risk Officer, ING Bank
Wilfred Nagel is group chief risk officer and a member of the executive board of ING Group since May 2012, where he is responsible for all of ING’s risk management departments including compliance. He has 35 years of banking experience, and has held important leadership positions such as chief executive of ING Bank Turkey, chief executive of ING Wholesale Banking Asia and global head of credit risk management for ING Group.

John Lee, Group Chief Risk Officer, Maybank
Dr. Lee is group chief risk officer and a member of the group executive committee of Maybank, responsible for credit and risk management across the Group. He was previously with Amanah Merchant Bank and the Kuala Lumpur Options and Financial Futures Exchange (KLOFFE). Prior to his appointment in Maybank, he served in financial services consulting and advisory as a partner with KPMG Business Advisory for 13 years. He has a Ph.D. in Financial Economics from Monash University and was awarded ‘Risk Manager of the Year 2014’ by The Asian Banker.

Christian Hunt, former prudential Chief Operating Officer, Bank of England
Christian led the organisation of the Bank of England's resources supporting its bank supervisory activities. Previously, he had been responsible for the supervision of international custody banks and investment banks at the Bank of England. Before joining the UK regulator in 2011, he was a principal at the private investment firm Vasari Global and a director of corporate finance at Deutsche Bank, and the assistant secretary of the Panel on Takeovers and Mergers, a regulatory body charged with the administration of London's code for takeovers and mergers.

Mark Lawrence, MD, Mark Lawrence Group & first CRO, ANZ
Dr. Lawrence is one of Asia's most experienced experts on banking risk. He co-chaired the Institute of International Finance's global risk management working group in 2009 and was the expert principal at McKinsey & Co. Before this, he was Group Chief Risk Officer (CRO) and a member of the Management Board at ANZ Banking Group in Australia from 1999 - 2004. Prior to this, he held senior risk management roles at several New York investment banks. Earlier, Mark co-founded the Market Risk function at Merrill Lynch in New York in 1987.

Prof. Edwin Yuen, Professor of Risk Management, University of Hong Kong & former Chief Analytics Officer, Bank of China (HK)
Prof. Edwin Yuen has more than 20 years of experience in risk analytics and computer system development. Prior to joining HK University he served as chief analytics officer at Bank of China HK. He was also head of risk analytics for Standard Chartered Bank, responsible for the successful global implementation of its Basel II program and held various senior positions in the Canadian Imperial Bank of Commerce in Toronto and the United Overseas Bank in Singapore. He was the chairman of the Basel Implementation Committee of the Hong Kong Bankers Association in 2011.

Gordian Gaeta, International Resource Director, The Asian Banker
Dr Gaeta has been a banking consultant for some 25 years. He has advised and served many of the leading financial services organisations across Asia and close to half of the top 100 banks worldwide. He specialises in developing and implementing analytical solutions for complex strategic issues in financial services-related industries undergoing significant change or being exposed to intricate risk issues.

Tsuyoshi Oyama, Partner, financial industries group, Deloitte Touche Tohmatsu
Tsuyoshi Oyama is a partner of financial industries group at Deloitte Touche Tohmatsu in Tokyo and mainly engaged in risk management and regulatory advisory services for large Japanese and Asian financial institutions. Oyama joined in May, 2010 after worked 23 years at the Bank of Japan, most recently as deputy director-general in Financial System and Bank Examination Department. At the BoJ, he conducted several projects to deal with Japanese banks' NPL problem, on-site examinations for Japanese major banks, and recently to lead Basel II implementation in Japan.

The fee to participate in the 3-day Risk Games Convention is as follows:

The fees cover:
• Use of the highly tested simulation programmes
• All course material used over the 3 days
• Lunch & coffee during the 3 days
• Certificate of Participation issued by The Asian Banker

Contact us now to find out more information on group discounts.

Register early to benefit from the informative pre-conference briefings and consultations.

“I had a fantastic experience at the Summit. There was a good collection of people from many different banks, not just from Asia. I will definitely recommend my colleague to attend this next year.”
- Carl Clasen, Head of Business Credit, Bank of Queensland
“The Summit is the perfect place to be – the ideal platform where you will be able to meet risk, technology and transaction related professionals to exchange ideas, share knowledge and discuss future trends.”
- Utpal Bora, CIO, KBZ Bank
“The environment for learning is great. I had a good time here, gaining much insight that is relevant to my job.”
- Suebsakul Monmaturapoj, VP, Bangkok Bank
“Having participated in the Summit for the past two years, we have gotten a lot of visibility and connections with new and old customers within the region as well as globally. We are looking forward to the Summit next year.”
- Kit Chan, Senior Director, Moody’s Analytics
“From The Risk Games Convention, I found out that the issues facing the industry are quite common among different countries. I met many participants from Bangladesh, Malaysia, Indonesia, and other places, and we realised we share many similar points.”
- Jayasuriya Kushan, Senior Manager- Treasury Mid Office, Hatton National Bank
“The topics were interesting because it wasn’t finance bias. There was a bit on procurement, supply chain, customer relationship and a fair bit on business- overall a good mix of topics at the Supply Chain Conference.”
- Ryan Tang, MD, DHL Supply Chain
“As there are so few people in banking today who really understand how a bank fits together, the Risk Games, through simulations, allow delegates to truly comprehend basic mechanics, levers and drivers in a bank and what happens when you pull or push each of them.”x of topics at the Supply Chain Conference.”
- John Shelly, CRO, RBS
“The Financial Markets Infrastructure Conference was good as it not only focused on the technical aspects but also had informative sessions on OTC derivatives, clearing custodians that bring market novelty. This balance was very much appreciated.”
- Simona Catanescu, Director, Securities Market Asia, SWIFT
“This is our 5th year at the Summit. We participate because we want to establish and reinforce our brand and awareness across the region and The Asian Banker folks are the best people in the business that know the banks.”
- Jennifer Lim, Marketing Director Asia, FIS 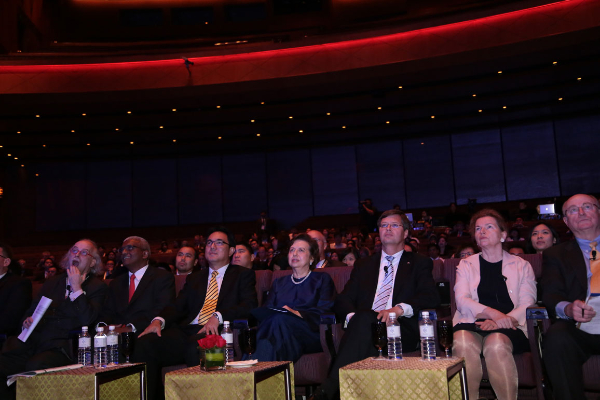